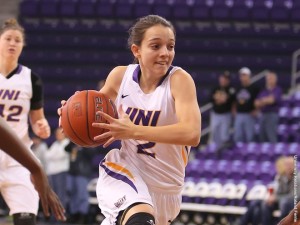 The University of Northern Iowa women’s basketball team rallied back from an eight-point deficit in the third quarter to beat the Nebraska Cornhuskers 64-62, advancing to the second round of the WNIT. UNI improved to 23-10 overall this season.

UNI finished the game going 5-for-5 on their last shots while Nebraska went 4-for-5 from the field on its last attempts. UNI was able to hold the Huskers off with some clutch free throws down the stretch from Madison Weekly, earning the 64-62 victory.

UNI was led once against by junior Madison Weekly who finished with 22 points, six rebounds and a career-high tying six assists. Jen Keitel added 15 points and eight boards while Amber Sorenson and Angie Davison both chipped in eight points each.

Nebraska started to chip away at the UNI lead to start the second quarter, eventually gaining the advantage with 7:11 on the clock on a bucket from Jasmine Cincore, making it 20-19 while the Panthers went 0-for-4 from the floor. The Huskers largest lead of the quarter was three points at the 6:27 mark, with strong paint play from Sorenson and Keitel bringing it back within a point, but Natalie Romeo scored 10 of Nebraska’s 16 second quarter points, sending them into halftime up 28-25.

Both teams struggled from the field in the third, with Nebraska going 2-for-12 from the floor in the first five minutes of the period while UNI didn’t score its first points of the quarter until the 3:40 mark, allowing Nebraska to take a 32-28 lead. Consecutive threes from Mikaela Morgan and Weekly were able to bring the Panthers within three points of Nebraska late in the quarter, but the Huskers were ab le to hit a clutch two clutch baskets in a row to send UNI into the final quarter down 41-35.

UNI rallied back from an eight-point deficit in the third quarter to tie the game 42-42 after forcing three consecutive turnovers against the Huskers, countering with a huge three-pointer from A. Davison and a great pass-and-score play from Morgan and Weekly to tie the game with 6:01 remaining in the game. UNI took a 45-42 lead after a three dropped from Weekly at the 5:29 mark, opening the floodgates on the floor with Nebraska tying the game twice in the next two minutes of the game.

One of the key plays in the fourth quarter was a layup that rolled off the fingers of Weekly and floated into the basket with 27 seconds left in the game at the shot clock buzzer to give UNI a 60-57 lead. Nebraska was able to hit some key shots down the stretch, cutting it to one-point, but Weekly’s free throws and strong defense from the Panthers propelled them past the Huskers.

UNI will host the second round of the WNIT on Saturday, March 19 in the McLeod Center when they take on the Drake Bulldogs. The game is set to tip off at 7 p.m. CT.