You are here: Home / Sports / Hawkeyes look to restart with NCAA opener 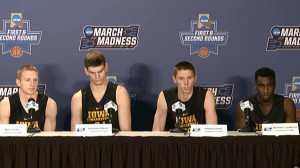 The Iowa Hawkeyes hope some time off has allowed them to rest and be ready to make a run in the NCAA Tournament.

Iowa faces a first round matchup with Temple at 2:10 P-M Friday in Brooklyn, New York.

One of the first things asked of Hawkeye senior Jared Uthoff in the news conference Thursday was what happened in the late season slide from leading the Big 10 to a first round exit in the conference tournament.

“Towards the end I think the Big 10 season really started to wear on us,” Uthoff says. “Day in and day out you are playing great teams — it’s not like you are playing poor teams — so loosing to those good teams I think is a good learning experience for us and I think we’ll bounce back in this tournament.”

Senior Anthony Clemmons says they know there is no room now to play poorly.
“With the experience with this tournament, you have to come out and give it your all every second. Every possession counts, there’s not a possession you have to take off. Anything can happen in March and in these tournaments, so just by knowing that and understanding the process we’ve been through,” Clemmons says.

Senior Adam Woodbury had some similar thoughts. “I think that the biggest thing is there is no tomorrow, this is s do or die situation,” Woodbury says. “We all want to go out on top in our careers and leave a lasting legacy at the University of Iowa. And this is our last chance to do so.”

Uthoff says beating Temple will not be an easy task. “From watching them on film, I’ve been impressed by the tempo and how they try to dictate the tempo. They don’t panic, they play within themselves, they make you beat them,” Uthoff says. 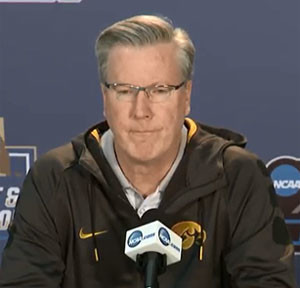 Head coach Fran McCaffery was asked about Uthoff’s assessment that the team got worn down late season by the tough conference schedule.

“I think that’s as good an explanation as any, I mean you look at the scores, our loses were very close games, a couple possessions here or there. Teams scout you and you play them for the second time sometimes,” McCaffery says. “We also were in first place for part of that time, so teams were coming after us pretty good.”

McCaffrey says there’s also a more pragmatic view of what happened. “Pretty much lost to good teams,” he says. McCaffery is good friends with Temple coach Fran Dunphy, and says he admires the way Dunphy coaches.