You are here: Home / Health / Medicine / Report ranks the health of each of Iowa’s counties 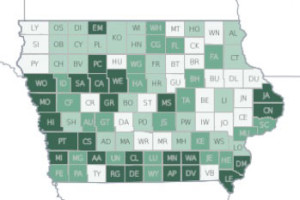 A new report ranks the health of every one of Iowa’s 99 counties and it shows some dramatic differences between rural and urban counties.

Katie Wehr, spokeswoman for the Robert Wood Johnson Foundation, says the annual County Health Rankings isn’t a contest but more of a tool or guidebook.

“We collect a whole host of data, 30 factors in particular, to talk about how health is much more than what happens in the doctor’s office,” Wehr says. “It includes everything from public safety to education to poverty. That all helps shape how well and how long we live.”

Large urban counties have lower smoking and obesity rates, fewer injury deaths and more residents who attended college. “Through the website, CountyHealthRankings.org, it enables communities to see the trends over time within their particular county and also enables them to identify where they’re doing particularly well and where there are additional areas for improvement,” Wehr says. “It also gives them the ability to understand how they’re doing compared to their neighbors so they can continue to learn from their neighbors about what’s working and what’s not.”

The report contains county-by-county breakdowns for all 50 states. Coincidentally, Iowa’s highest- and lowest-ranked counties are both on the western border and in close proximity to one another.

“The healthiest county in Iowa is Sioux County and the least healthy or the lowest-ranked county is Monona County,” Wehr says. “What we recognize is the rankings are a starting point and not an ending point. It’s not even a race to the top because rankings vary every year depending on how well you are doing, or not, compared to your neighbor.”

The report includes a “tools” section that contains a database of approaches, personalized coaching and a range of other resources to help communities in their efforts to improve health.