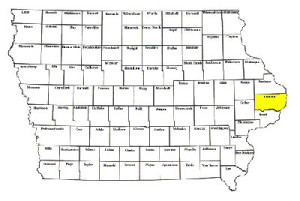 Several residents of Clinton County, in eastern Iowa, will be getting help from the state as they work to rebuild their lives after severe storms did heavy damage in the county this week.

Clinton County Emergency Management Director Chance Kness says three tornadoes touched down in the county on Tuesday. The hardest hit location was the Royal Pines Village Mobile Home Park in Clinton, as five homes were destroyed and 24 others were damaged.

“And there was damage to multiple farm and residential areas in the county, one of those in an area known as ‘Six Mile,’ north and west of Clinton,” Kness said. On Thursday, Governor Terry Branstad issued a state of disaster emergency proclamation for Clinton County.

Among other things, the action clears the way for residents to apply for grants that could be used to help with home or car repairs, clothing, food, or temporary housing.

“That’ll help those families get back to as close to normal as possible, as soon as possible,” Kness said. Many residents of the mobile home park do not have insurance. Although a few people were injured in the storm, no one was killed. Applicants have 45 days to submit a claim for reimbursement.