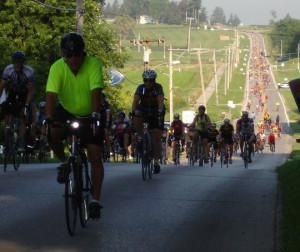 Spring arrives this weekend and while the weather is still far from being spring like, soon, Iowans will be zipping around on their bicycles.

A new survey finds many Iowans who enjoy pedaling their two-wheelers could use a refresher course in cycling laws. Gail Weinholzer spokeswoman for AAA-Iowa, says the results were something of a surprise.

“We asked people how confident they were knowing the bike laws in their state,” Weinholzer says. “Apparently, only 61% of all Iowans feel comfortable that they know the bike laws in the state of Iowa.” Studies find that wearing a bicycle helmet can prevent 85-percent of all traumatic brain injuries in cycling accidents, but many of the Iowans surveyed don’t bother to buckle one on.

“There isn’t a helmet law, but we did ask them how often they wear a helmet,” Weinholzer says. “Only 58% of Iowans actually admitted to wearing a helmet some of the time.” Before pumping up the tires and heading out on the trail for the first time, she suggests cycling enthusiasts review the safety recommendations and familiarize themselves with the laws.

“The most important thing I would remind people, if they’re biking on roadways, you bike with traffic,” Weinholzer says. “Many times, people think they should be riding into traffic, but that typically has more to do with pedestrians. Make sure you obey all of the traffic safety laws that other vehicles need to obey. You’re not exempt. You still have to stop for stop signs and red lights and those sorts of things.”

For more tips on choosing a bike and helmet, as well as maintaining and riding a bike, download Bike Basics – The AAA Guide to a Great Ride .