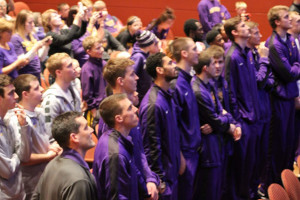 UNI players wait for their name during the NCAA selection show.

Northern Iowa plays in the late game in Oklahoma City tonight at 8:50 against Texas in the NCAA Tournament.

“I watched their game at Iowa State…in that game they pressed quite a bit. They don’t press nearly as much as they did when he was at VCU,” Jacobson says. “Now in saying that, in the Iowa State game they full court pressed, did some trapping, we’ve seen that as well, so that is going to be part of their game.” He says the pressure will come in both the full court and half court.

Jacobson says Smart likes an up-tempo game. “They are going to get the ball — made shot or missed shot — they are going to push it at you, so your transition defense has to be good. They go hard and to the boards and rebound. That system, his personality, you see it. Everything they do is coming at you,” Jacobson says.

The Panthers like to control the tempo of games and Jacobson says they haven’t tried add anything new as they’ve prepared. “I don’t know that either team is going to change much. We are both going to work hard to get our team to do what we do,”according to Jacobson. That philosophy is based on past tourney experience.

“I guess what I’ve learned is, now is not the time to be messing around. The key is that your guys play with a lot of confidence and that they play loose,” Jacobson explains. “And the only way to do that is to do the things that you’ve been doing awhile. And that’s really become our approach.”

The 11th seeded Panthers come into the game with a 22-12 record, while the sixth seeded Longhorns are 20-12.