You are here: Home / Sports / Panthers stunned as Sweet 16 bid slips away in Texas A&M comeback 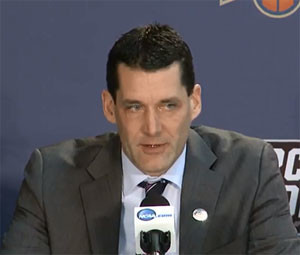 Northern Iowa was on the wrong side of the miracle finish Sunday in Oklahoma City as they lost a 12 point lead with :44 seconds to allow Texas A&M to take there game to overtime.

The Aggies ended up winning 92-88 in the second overtime, and ended the Panthers season short of the Sweet 16. An emotional coach Ben Jacobson talked about the loss with the media.

“We played our tails off, and unfortunately we were on the wrong side of just a crazy 30 seconds. You know, a 30 seconds that we aren’t going to be able to ever have an answer for, nor do we need one, it just happened to go that way,” Jacobson says.

Matt Bohannon who normally brings the ball in was out with an injury and the Panthers couldn’t get the ball in. Jacobson says Bohannon’s injury played some part. “We talked about because we didn’t have any timeouts, we talked about throwing the ball long if you were in any trouble. And unfortunately, in that situation you don’t think about throwing it long,even after you’ve talked about it,” Jacobson explains. “So had we maybe done that once or twice and gotten some seconds off the clock, then we’re fine. There will be 100 different ways to slice that up.” 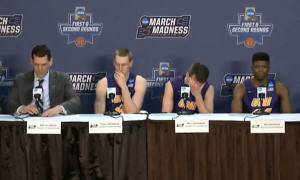 Coach Jacobson, Paul Jesperson, Matt Bohannon and Wes Washpun, deal with the emotion of the loss.

Jacobson brought Bohannon and his two other seniors, Paul Jesperson and Wes Washpun to the interview room, saying they could handle talking about the loss.

Washpun credited Texas A&M. “I think they just made a bunch of great individual plays.Turned the ball over, we made some mistakes and they capitalized on it, and that’s credit to them,” Washpun says. Jesperson hit the half-court shot to win the game in the first round and says it seemed like they were going to win this one.

Bohannon says the players and coaches will help each other get through this loss. “No one else saw what we did this season, noone was with us every day getting up early shooting shots, dogfighting through practice trying to turn this thing around from 10-11. I hope people understand just how much we came together and how much if you believe you can do something special,” Bohannon says.

Coach Jacobson says they will get through this and his role will be to lead them. “I learned a lot from these three seniors about how to do that, so I’m better at it now than I was when this season started. So I, with the help of my staff and our administration, we will lead just like we’re supposed to,” Jacobson says. “And we will make sure our guys understand that things happen. We’ll crank it and we’ll get ready, and we’ll be upbeat and be ready to go as soon as we need to be come November. I don’t know any other way. We’re going to lead.”

Jacobson was asked if this is the toughest loss he’s ever had, and he says it is no question, because of the three seniors. “What this team was able to accomplish, I’ve told these guys this for a few weeks now, what they’ve been able to accomplish this year I think is the greatest thing that’s happened in our program,” according to Jacobson. He says with the players they lost to graduation, and a roster of nine guys, and a team that didn’t have a lot of experience, to rattle off the wins like they did from mid-January until now is why it is the greatest thing that’s happened to a UNI team.

The Panthers finish the season at 23-13.