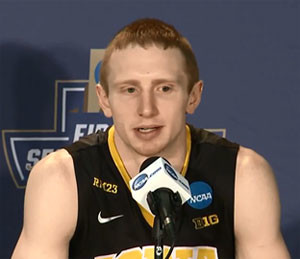 Villanova pulled ahead of Iowa early and built a 34-point lead at one point and went blow out the Hawkeyes in the second round of the NCAA Tournament 87-68 Sunday in Brooklyn, New York.

Senior guard Mike Gesell says they were never able to get on track and Villanova played well.

“They did a very good job of moving the ball, and I think we didn’t come out with the intensity defensively that we needed against a team like that. They’re a team that is very unselfish. They just play within themselves,” Gesell said.

Hawkeye coach Fran McCaffery, said they gave Villanova too many good looks from the outside.

“Our close-outs weren’t as crisp as they needed to be because they’re a tough group to close out to because they’ll rip a drive on you,” McCaffery said, “So we closed out a little bit short, and they were making threes. We had a couple uncharacteristic turnovers that led to easy transition layups.” He says they didn’t hit the 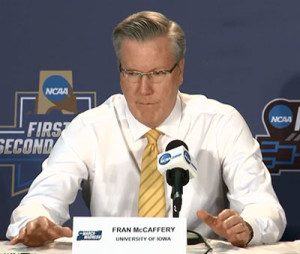 glass hard and that hurt, especially when they weren’t hitting shots.

“I’m a little bit more pleased with how we played in the second half in terms of getting to the glass, taking care of the ball, and executing our offense. But that said, we still shot 2 for 12 in the second half from three. It’s hard to come back,” according to McCaffery. “You’ve got to make threes. We had good looks at it from three. If we could have made a few, maybe it would have been a little bit different.”

The loss ends what was a wild up and down season that saw Iowa soar up in the rankings, and then fall as they lost seven of their last ten games.

Gesell said overall he is pleased he was part of the turnaround of a program that didn’t even make the tournament. “It was a lot of fun and a lot of fun to just be a part of. We have a bright future here at Iowa. We have a lot of young guys that play the game the right way, and they’re a close knit group. I’m going to be very excited to continue to watch them next year and throughout the years,” Gesell said.

Iowa will have to replace other key seniors Anthony Clemmons, Jarrod Uthoff, Adam Woodbury along with Gesell.