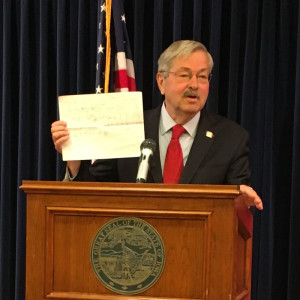 “I understand that there are those that in this election year that are going to criticize, but I think if you look at the totality of his experience and his record and his commitment to the people of Iowa, it’s beyond reproach,” Branstad said, “and I am very proud of the fact that he’s the chair of the Judiciary Committee and I respect his judgment.”

Senator Grassley and the other Republicans in the Senate have said they want the next president to fill the vacancy on the U.S. Supreme Court. Protesters gathered outside Grassley’s private event early this morning in Denison and a protest is planned outside Grassley’s office in downtown Des Moines over the noon-hour. Branstad said Grassley’s done a “phenomenal job” and he supports Grassley’s decision.

“He’s got a lot more expertise and knowledge on this than I do or anyone else,” Branstad said. “…Far be it from me to second guess or criticize the senator’s commitment to represent the people of Iowa. He has a long and proud and distinguished record and he’s very conscientious.”

Branstad made his comments this morning during his weekly news conference — and he held up the copy of the family tree that Merrick Garland gave him in February. The two second cousins met for the first time last month while Branstad was in Washington, D.C. for the National Governors Association meeting.

“He’s a very wonderful guy. We met he and his wife. My wife and I had breakfast with them on a Sunday morning,” Branstad said. “…I don’t know a lot about his record, but I do recognize he’s a very dedicated, conscientious public servant, so we share that in common.”

Branstad is the nation’s longest-serving governor. Garland is the chief judge of the U.S. Court of Appeals for the District of Columbia. He’s been a judge since 1997 and before that worked in the Justice Department, overseeing the Oklahoma City bombing case and the case against the Unabomber.

Branstad and Garland are related on the governor’s material side.

AUDIO of Branstad discussing Garland with reporters this morning, 4:49