You are here: Home / Crime / Courts / Protesters and plane fly-over urge Grassley: ‘Do Your Job’ 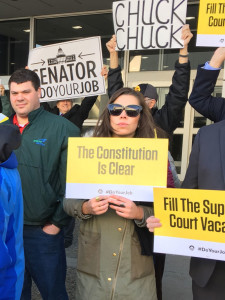 The group broke out in a chant of “do your job” as a plane flying a banner carrying the same message flew overhead.

Tracey Aubrecht, a 44-year-old homemaker from North Liberty, drove more than two hours to Des Moines to attend the rally.

“I have called Grassley’s office every week for the last two or three weeks and it doesn’t seem like he’s getting the message, so I need to find another way to do this,” Aubrecht said. 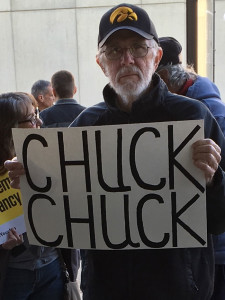 Mortenson and her husband, Frank Kutcheon, held signs which read: “Fill the Supreme Court Vacancy” and “The Constitution Is Clear”.

“We’ve been harping about this to each other every morning when we have coffee,” Mortenson said. “We just talk about how this isn’t right.”

Vince Martinelli is an organizer for NextGen Climate, one of the groups that collaborated to stage rallies today around the country. He urged the crowd in Des Moines to go to as many public events as Grassley may hold during the next two weeks in Iowa.

“If we don’t talk to him now, when he goes back to Washington he’s going to be stuck in his same echo chamber, just like before,” he said.

Tim Mahern-Macias, a field organizer for the League of Conservation Voters, echoed those sentiments.

“This needs to be a continued effort by everyone here to make sure this moves forward in the right direction,” Mahern-Macias said. 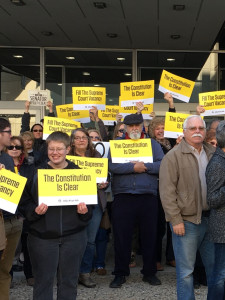 There was one homemade sign in the crowd that read: “Chuck Chuck” — a direct reference to Grassley’s 2016 reelection bid. State Senator Rob Hogg — one of the four Democrats who are running in a primary for a chance to challenge Grassley in the fall — attended the rally.

Half a dozen activists from central Iowa drove to Denison this morning to protest outside a school where they believed Grassley was due to speak to a class, but there was a scheduling mix-up and Grassley was not in Denison.

Grassley has said the next president should choose to person to fill the vacancy on the U.S. Supreme Court. Grassley, who is chairman of the Senate Judiciary Committee, does not plan to convene a hearing to consider Merrick Garland, the federal appeals court judge President Obama nominated for the nation’s highest court.