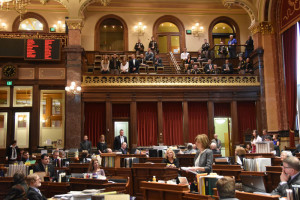 Trooper Joseph William Long listens from the House balcony as a resolution honoring him is read.

A 22-year-old state trooper was honored by the Iowa House and Senate today for saving the life of a man who collapsed in the capitol.

Craig Vance of Des Moines just got a new state government job and was sent to the capitol on February 18th to get a security badge.

“I just got in line and not even a half minute later I felt, ‘Oh, I’ve got to sit down,'” Vance says. “Didn’t have time to sit down. I collapsed. I banged my head against the floor and I don’t remember doing that.”

Iowa State Patrolman Joseph William Long is part of the capitol police detail. He heard the call on his radio and realized the victim was right around the corner.

“As I got closer, I could see there was blood and then the people kind of parted. I saw a lady giving him rescue breaths and that’s when I kind of realized, like, this was going to be more serious than I thought it was going to be,” Long says. “I knealed down and asked her if he was having a heart attack. She said, ‘Yes,’ and then I checked for a pulse and breathing and there was neither, so I just immediately started compressions and did about three sets of compressions — me doing compressions, her doing breaths — and about the third set is when he just kind of took a gasp of breath and woke up.”

Vance is still recovering, but he was at the capitol today to thank Long in person.

Trooper Long, who lives in Ankeny took his first CPR course when he was 18 and working for the fire department in the town of Kelley. He’s been with the patrol for 16 months.

The Iowa House and Senate passed resolutions this morning honoring Long for “service in the line of duty.”