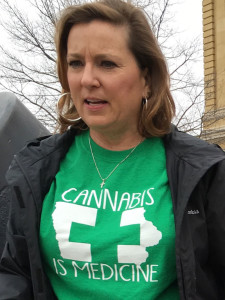 Members of “Iowans 4 Medical Cannabis” gathered on the statehouse steps Tuesday to urge House leaders to allow debate of a bill that would make it legal to grow, sell and use marijuana as prescription medicine for a variety of serious illnesses.

“I hope they realize that there are thousands of Iowans that are needing this treatment now,” said Sally Gaer of West Des Moines.

Gaer’s 26-year-old daughter has chronic epilepsy and is taking cannabis oil, but while the oil is now legal to possess in Iowa because of a 2014 state law, the family can’t buy it here. Gaer supports the bill that would set up a process for growing and dispensing cannabis in Iowa for chronic epilepsy, as well as other serious conditions like cancer.

“Time is running out for the people that are suffering,” Gaer said.

Iowa House Speaker Linda Upmeyer, a Republican from Clear Lake who is a nurse, has said lawmakers should wait for the federal Food and Drug Administration to approve marijuana as a prescription medication. Representative Peter Cownie, a Republican from West Des Moines, argues the State of Iowa should join 23 other states that do allow marijuana to be dispensed as medicine.

“I think there’s been such a groundswell of support amongst Iowans,” Cownie said. “Based on polling and just anecdotal stories of talking to legislators, my guess is we have more support today than we had two months ago.”

But Cownie admits time is running out, as the end of the 2016 legislative session is near because of recent agreements on tax and spending issues. 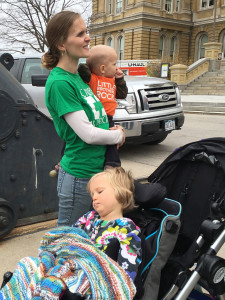 Racheal Selmeski with daughter, Maggie in her stroller.

Racheal Selmeski and her family moved from Iowa to Colorado in the fall of 2013 so her baby girl could take cannabis oil as treatment for chronic seizures.

“My daughter’s proof that cannabis is medicine and so that’s what I want them to know, that it’s safe,” Selmeski said Tuesday. “It’s effective.”

Selmeski was at the state capitol to lobby legislators. Her four-year-old daughter, Maggie, suffered as many as 500 seizures a day when she was a baby and Selmeski believes Maggie would dead now if it weren’t for the cannabis oil.

“Two and a half years in, we’re getting to experience a little girl that’s able to engage a little more with us, be able us to enjoy her and she’s in school now,” she said. “It’s been fun to watch her grow and develop and have a chance at life.”

A medical marijuana bill has cleared the House Commerce Committee, but awaits action in another House committee and a vote on the House floor. Last year the Iowa Senate passed a bill that would have set up a system for growing and dispensing medical marijuana in Iowa.