You are here: Home / News / Blum says special interests ‘own’ some members of congress 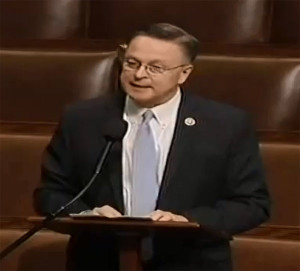 Blum is a Republican businessman from Dubuque who is in his first term in the U.S. House. He formed a term limits “caucus” in the House and serves as the group’s chairman.

“I recognize the long odds of congress voting to place term limits on themselves. As I often say, that’s much like asking turkeys to vote for Thanksgiving,” Blum says. “We know how that would end up, but I’ll keep pushing congress to act because it’s what the American people want.”

“I’m not here to criticize individual members of congress and not all of my colleagues who have been in congress for decades are not part of this problem,” Blum says, “but it’s time congress listens to our customers and gives our customers what they want: a vote on term limits.”

It would require a constitutional amendment, ratified by the states, to impose term limits on congress. Blum delivered a six-minute speech about term limits on the House floor yesterday, suggesting “special interests own” some of his colleagues in congress.

“The root of our problem is that our politicians are incentivized by this system to care more about staying in office rather than about doing what is best for the country,” Blum said.

Blum is being berated by Democrats for a tweet he sent Monday. Blum said Washington, D.C. is “booming” and he posted a picture of construction cranes, along with the remark that “DC needs a recession.” The Building Trades Council of Cedar Rapids and Iowa City is calling for an apology. A union vice president asks if Blum realizes not everyone is a millionaire and a recession would lead to job losses for working class Americans.