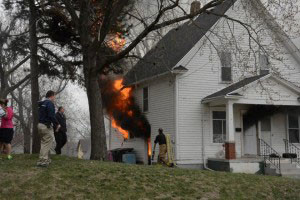 An outdoor cooker caught this Sioux City home on fire.

Two Sioux City residents preparing food for their business ended with major damage to their home from a fire.

The cause of the fire was an unattended outdoor propane cooker, which ignited nearby combustibles and spread to the house.

The occupants of the home run a food cart business and were roasting corn in that cooker when they left it unattended for a short period of time.

Authorities say the two occupants sustained minor burns trying to extinguish the fire. A firefighter also received a minor injury. All three were treated at the scene and not hospitalized. The fire caused substantial damage to the structure and it was red tagged by the city as unsafe.