You are here: Home / News / Winter storm on the way, DOT well stocked to handle it 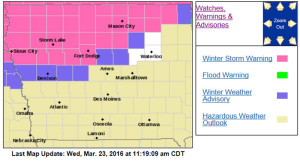 Though we’re several days into spring, a whopper winter storm is predicted to roll across much of Iowa late today and into tomorrow.

It may dump a foot of snow in northern counties. An army of state snow plows and salt spreaders is at the ready, according to Craig Bargfrede, winter operations administrator for the Iowa Department of Transportation.

“The weather service is predicting this is going to be a heavy, wet type of snow which will be started off by rain changing to snow and ice, so brine applications may not be as effective as we typically see,” Bargfrede says. “In that case, we’ll probably be using more of the actual rock salt material to put down.” Large DOT storage barns are scattered across Iowa which contain a masssive stockpile of some 200-thousand tons of salt.

“We actively bring in salt throughout the whole winter season, so right now, across the state, we’re sitting at about 87 or 88% of our capacity,” Bargfrede says. “We have plenty of material on hand statewide to handle this event.” Even though it’s no longer winter according to the calendar, Iowans know winter weather will often arrive early and stay late, and teams of snow plow drivers are prepared to head out on their big orange machines.

“Depending on the length of the storm, we have our full-time staff ready to go out to operate in this event,” Bargfrede says. “We’re just under 1,000 full-time employees, plus, we’re in the neighborhood of 400 seasonal stand-by employees that we can call, too, if we need to.”

Get the latest on the forecast at weather.gov and on road conditions at 511ia.org.