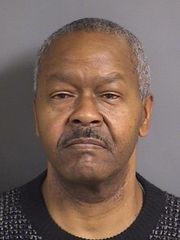 Police believe they’ve closed one of Iowa’s cold cases. Officers on Thursday arrested an Iowa City man for the shooting death of another man over 30 years ago.

“I would say a big part of this is that technology has evolved over time, since 1985, so that was a big reason for looking at everything again to see if we could use some of the scientific evidence that didn’t exist back in 1985,” Lyness said.

Coralville Police Chief Barry Bedford said DeWoody had been dating Burtch’s wife. “I think it would be fair to say that Mr. Burtch was a person of interest from the very beginning,” Bedford said. “Officers have explored that thoroughly over the years, we’ve revisited this several times.”

Lyness said Burtch was interviewed by a DCI agent in January and recanted his original story about three men he claimed were “harassing” DeWoody and Burtch back in 1985. Authorities used a court order in January to obtain a sample of Burtch’s DNA to compare to the crime scene. Lyness said Burtch stated at that time he would “get buried by the sciences of this thing.”

Lyness said DeWoody and Burtch’s wife spent the evening of August 12, 1985 together and then Burtch’s wife returned home. A short time later, Burtch left for about 90 minutes. Investigators believe he killed DeWoody during that time. DeWoody was found shot to death the following morning at a picnic shelter on University of Iowa’s Oakdale campus in Coralville. 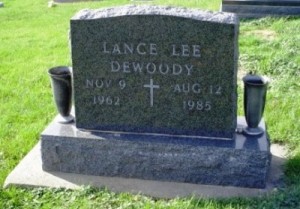 Barry Bedford, the Coralville Police Chief, said officers reviewed the cold case many times of the past 30 years. “I don’t know any police department (that) forgets something like this and we don’t,” Bedford said. “We don’t give up on those old cases.” Burtch was booked in the Johnson County Jail on Thursday and charged with first-degree murder.

DeWoody grew up in the Jones County town of Olin. The only surviving members of the DeWoody family are his father, Carl, and sister, Carrie. His mother, Bernita, died in July 2009.

Iowa DCI Assistant Director Mitch Mortvedt reading a statement from the DeWoody family:
Audio: (runs 1:27)
Mortvedt, like the victim Lance DeWoody, grew up in Olin. Carl DeWoody was one of Mortvedt’s school teachers.