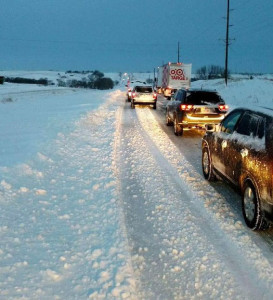 Some sunshine this afternoon helped snow plow drivers and motorists in western and northwest Iowa deal with the big snowfall there, but the heavy wet snow has made progress slow going on hard surface roads.

Woodbury County Deputy Tony Wingert says it took crews much longer to deal with what was 15 inches of snow that had drifted.

“It’s such a heavy snow, it has taken them a lot more passes to get it wider — because they just can’t push that much weight off to the shoulder. But with every pass, the roads are getting a little wider and a little better,” Wingert says. Lieutenant Wingert says some of the county’s roads are still in rough shape, and it may take some time for them to recover.

“They were soft prior to this because of the frost going out and everything, and now you put this much moisture on them. A lot of those, they may be impassible for days,” according to Wingert. He says it made it tough for emergency vehicles to get to rural areas. Wingert says in one case they had to call in the helicopter to go to a call because the Correctionville Ambulance wasn’t able to get there. “If you are on a main thoroughfare we should be okay. But if you are on a gravel, it may take emergency vehicles a while to get to you,” Wingert says.

At least one county snowplow got stuck. Wingert says travel conditions should improve today as crews have more time to clear snow and make the roads safer.