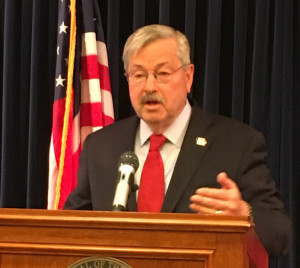 Governor Terry Branstad concedes legislators aren’t going to embrace his idea to shift school infrastructure money to water quality initiatives, but the governor is hoping a smaller scale plan might get approved yet this year.

Water utilities in Iowa charge the state sales tax to customers and Republicans in the Iowa House are considering the idea of dedicating the $28 million in annual water usage taxes to water quality initiatives. GOP lawmakers may also dedicate more money in the state’s Resource Enhancement and Protection program to water quality projects. The governor told reporters he’s signalled to legislators that he’s “realistic” and could accept their plan.

“That’s what I hope can get passed before the legislature adjourns,” Branstad said.

However, the governor said his long-term goal is to revive his idea for extending the sales tax that supports school infrastructure projects for 20 more years, to finance both water quality and school projects.