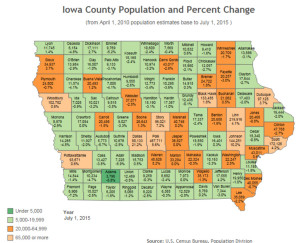 Dallas County in central Iowa remains the fastest growing in the state according to U.S. Census Bureau estimates.

State Data Center coordinator Gary Krob says the population of the county has grown by 14,000 people since the 2010 Census.

“They’re showing the kind of growth we have been seeing from Dallas County for a number of years now — 21 percent since 2010 — which is the highest growth in our state,” Krob says. Dallas County’s population has increased by 169 percent since 1990. Johnson County is second in growth (10.2 percent) and Polk County third (8.6 percent).

One third of Iowa’s 99 counties have grown, and a majority of the population is centered around big cities. “Fifty-one percent is actually is in 10 counties — Polk, Linn, Scott, Johnson, Black Hawk, Woodbury, Dubuque, Story, Pottawattamie, and Dallas. All ten of those are metropolitan areas or part of one,” according to Krob.

While Dallas County has shown the largest percentage growth, Polk County, which is the home to state government, had the largest actual numbers growth in population. Polk County gained 37,076 new residents and remains Iowa’s largest county with an estimated population of 467,711.

Clinton County saw the largest population decline with a drop of 1,348 residents. Cerro Gordo County was next with a loss of 1,134 residents. Adams County in southwest Iowa has the smallest population with and estimated 3,796 people, followed by nearby Ringgold County with an estimated 5,033 residents. Births outpaced deaths in Iowa in the last 10 years, but Krob says most of the increase in population is from people moving into the state. And a majority of the new arrivals are from other countries.

Krob says the meatpacking industry is likely one of the big reason for the increase. “I would assume so, this data obviously doesn’t give explanations for why the migration is occurring, just that it is. But when you do look at the counties and there are other tables that you can look at on what is going on in those counties,” Krob says. “That would lead you to believe that obviously employment is a big factor and the type of employment could lead to international migration.”

When you add up the growth in all 99 counties, the storyline continues to be the same for Iowa’s overall population growth. “Just slow and steady growth, and there’s really nothing on the horizon that would lead me to believe that we would suddenly see a spike in population growth — or population decline really. Unless we can discover oil like North Dakota did, what we are seeing here is what we can expect to see for a number of years,” Krob says.

You can see more on the numbers on the State Data Center website at:www.iowadatacenter.org.