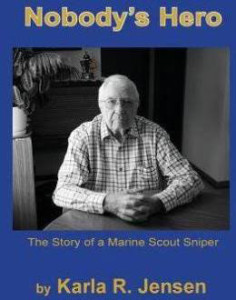 A western Iowan author is telling the story of a U.S. Marine who served as the Corps’ top scout, sniper and expert in hand-to-hand combat during World War Two.

Karla Jensen, an Audubon native, met 91-year old Del Schultz at a senior center in Beaver Dam, Wisconsin, as they were both in writers’ groups.

Jensen says Schultz approached her one day with a story he’d never told anyone, not even his family. “When I talked to him and started delving deeper into his service history, I just couldn’t believe I was sitting with this man who’d been to all the places we study in history, Iwo Jima, Okinawa, Nagasaki, Saipan,” Jensen says. “I just felt it was a book. I knew it had to be a book because of the twists and turns that are in his story as well.”

Schultz was a member of the first sniper-scout school ever assembled. Jensen and Schultz met every other week over a period of 18 months. He had two stipulations with regard to the book, including that his real name not be used.

“Because he was a hand-to-hand combat killer, and if you read the book, you’ll hear about what he had to do,” Jensen says. “He was a scout and a sniper so, that comes with all sorts of duties that are difficult. Especially in wartime, it’s something he had no choice about doing, he just had to do it. He was paid to do that work and he was good at it, so he said, ‘don’t use my real name.'” 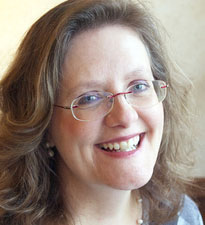 For the first 15 months, she wrote the story using the surname Leo, the name of her late father, who served in the Coast Guard during World War Two. Jensen says Schultz didn’t want his family to know about his past.

“He said, ‘My kids don’t really know any of my history. They only know that I served as a Marine and that was it,'” Jensen says. “Well, he served as the top Marine and scout. He was the best sharpshooter they had. If anybody read or saw ‘American Sniper’ last year, he said, ‘I’m that guy from 1944.'” Schultz wanted his story to be held until he was on his death bed, but eventually agreed to allow his real name to be used in the book and for his family to be filled in.

Jensen called Schultz’ son and told him about his father’s hidden past. “I just revealed that his dad was the top scout and sniper and knew Japanese fluently, a very intelligent man, knew karate and jujitsu and could get rid of somebody instantly with just one karate chop,” Jensen says. “He was really a very talented Marine.” The biography/memoir eventually ended-up being 60,000 words.

Jensen suffered from Post Traumatic Stress Disorder but never let on how much it affected him until after he began telling his story to Jensen. The title of the book is “Nobody’s Hero: The Story of a Marine Scout Sniper.” Jensen plans talks and book signings on April 7th at the Audubon Public Library and April 8th at the Irwin Public Library. The book is available at BarnesandNoble.com and Amazon.