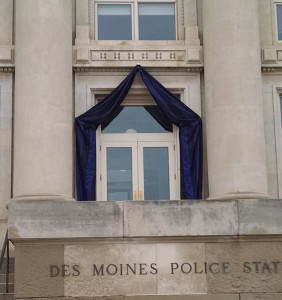 Black bunting was place over the entrance of the Des Moines Police Department following the deaths of 2 officers.

Questions still remain about the fatal weekend accident that claimed the lives of four people, including 2 Des Moines police officers and a prisoner they were transporting.

Des Moines police say 32-year-old Tosha Nicole Hyatt of Des Moines was the prisoner killed when a vehicle going the wrong way on Interstate 80 slammed into the police SUV near Waukee around 12:30 Saturday morning .

The driver of the car which crashed into the Des Moines police vehicle has not yet been identified. The Iowa State Patrol is investigating the accident, and says the car was engulfed in flames when troopers arrived on the scene. They are waiting for the State Medical Examiner to identify the driver.

The two officers had joined the Des Moines Department in October of last year.

Carlos Puente-Morales received praise from his fellow officers and superiors during his nearly four years as an Ottumwa police officer. He was hired in October of 2011 as Ottumwa’s first bilingual Police Officer.

The department struggled in finding a translator they could trust to talk to a prisoner, and Puente-Morales stepped in and offered his services. He was a veteran of the wars in Afghanistan and Iraq. He had also worked as a deputy in Franklin County.

Farrell had worked at the Polk County Jail and then became a Sheriff’s deputy before joining the Des Moines Police Department.