You are here: Home / Crime / Courts / Akron man sentenced to 60 years in prison for killing his mother 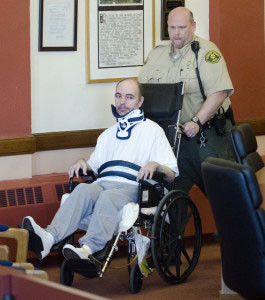 Jonathan Neunaber is wheeled into the courtroom.

The Akron man who admitted to killing his mother was sentenced today.

Fifty-four-year-old Jonathan Neunaber received 60 years in prison for the killing of his mother Esther in June of 2014.

Neunaber must serve at least 70 percent of the sentence before he is eligible for parole. Judge Steven Andreasen issued the sentence of 50 years for the second-degree murder charge, and ten years for willful injury.

Judge Andreason says the terms will run consecutively and should not exceed 60 years, with a minimum of 70 percent of the 50-year sentence served on the murder charge. Judge Andreason

also ordered Neunaber to pay $150,000 to Lisa Harms as the victim’s heir. Neunaber was also ordered to pay Plymouth County $244,000. Neunaber again was brought into the courtroom in a wheelchair and a neck brace. While Judge Andreasen read the sentencing order, Neunaber sat still and did not say anything, and did not show any emotion.