You are here: Home / Business / INS changes name of companies to Aureon 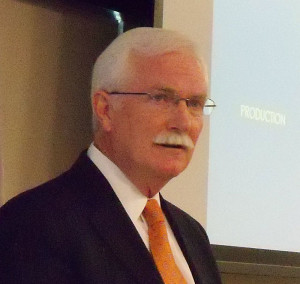 An Iowa-based company that’s been around for nearly three decades announced a new name and rebranding today.

Iowa Network Services began as a phone company and then expanded into other technology and human resources as it grew and acquired other companies. CEO Ron Keller announced they are going from being the INS Family of companies, to one company called Aureon.

“We are going to continue to offer the services we’ve done traditionally, again focus on communications, but now bringing together all these solutions. It enables to go to market and instead of talking to a client about one particular service — say IT or HR — we plan to have our sales force trained so they can talk about all the particular services we have,” Keller says.

The former companies are Iowa Network Services, Alliance Technologies, Alliance Connect, Merit Resources, Caleris and Portico Staffing. He says the change includes not only a new name and new logo, but they also have plans to expand the current West Des Moines headquarters by mid-2016. This will allow the consolidation of the operations of the various parts of the company.

“So, that as we have these separate business coming together we are kind of eating our own dogfood to a certain extent — meaning that each of these businesses don’t need their own HR department, their own IT department, their own finance department,” Keller says. “So, we’ll be consolidating those internally to have single shared services to satisfy the needs of our own internal clients.”

Keller says it’s a big change and there’s some trepidation. “Oh there always is, and there’s a lot of brand equity with all the companies that we have,” Keller says. He says when he was interviewed by the INS board five years ago they asked him about the brand back then, so the name has been an issue thought about for some time.

Keller says they are excited to move forward. “We have a campaign to be contacting some key customers by phone, others face-to-face, but all of them will be getting communication from us announcing the new name,” Keller explains. “And it’s and opportunity to get back in front of them and making sure we are doing what they want from us, and if they are not award of our products and services, it’s a chance to tell them about those.”

Keller says the company has 600-plus employees.