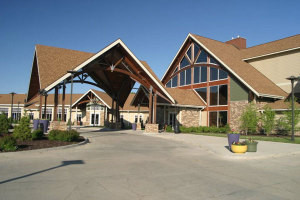 The Buffalo, New York company which oversees the Grand Canyon National Park and the visitors center at the Kennedy Space Center in Cape Canaveral, Florida is the finalist to manage the Honey Creek State Resort Park near Lake Rathbun in southern Iowa.

Iowa Department of Natural Resources spokesman, Kevin Baskins, says the Natural Resources Commission sought proposals for a new management contract, and will vote on the one submitted by Delaware North Companies at their meeting on Wednesday. “We had five different entities take an initial look at managing the resort, and in the end there were two that provided proposals to us,” according to Baskins.

Honey Creek opened in 2008 and has been controversial as it initially failed to make money, and then didn’t generate enough revenue to cover its bond payments. Lawmakers and the governor moved to pay off the bonds three years ago, and Baskins says that will help the new company move the resort forward.

“One of the provisions of those bonds kind of prohibited private investment in terms of reinvesting into the property,” Baskins says. “Once those bonds were approved to be defeased by the legislature in 2013 , it allowed us more flexibility to have a contract that would allow the new management firm to reinvest back into the property. And that ultimately was the goal that we were seeking.”

The new contract with Delaware North includes a provision for $2.5 million in capital investment. “Also there was the 3.03 million that goes into a maintenance reserve to make sure that we are maintaining the property. And then there’s also the $5.8 million in personal property reserve that can also be used for reinvestment purposes,” Baskins says. Baskins says if the new company is approved, they will decide what type of amenities need to be added to Honey Creek.

“I think that’s what they’ll be looking at — analyzing the market — what kind of amenities are going to make Honey Creek even more valuable and more attractive. Certainly that’s something that we are excited about,” Baskins says. The Natural Resources Commission will consider a 15-year contract at a special meeting Wednesday at 1:30 at the Wallace State Office Building in Des Moines.