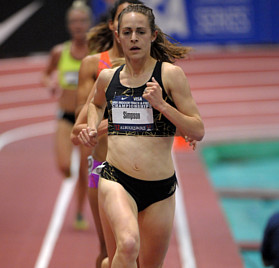 Iowa native Jenny Simpson will return to the Drake Relays next month to compete in the women’s 15-hundred meter run. The two-time Olympian was born in Webster City.

“She felt bad last year because she has preliminarily committed to come to Drake and the had to withdraw because of a prior commitment”, said Drake Relays director Brian Brown. “She contacted me and said she wanted to come to the Drake Relays this year.”

Joining Simpson are the likes of the former World Junior Champion in the 3,000 meters, Mary Cain, and Brenda Martinez.

Both Cain and Martinez make their return to the Blue Oval after Martinez competed in the 800 meters last season while Cain made her Drake Relays debut in 2013. Martinez recently finished fifth in the event at the World Indoor Championships, while fellow Rio Olympic Games Preview competitor Violah Lagat was eighth.

Heather Kampf, a Grand Blue Mile champion, is also in the field that is bolstered by the return of four-time USA Outdoor Champion Treniere Moser.