You are here: Home / Health / Medicine / Iowa Donor Network urges you to become an organ donor 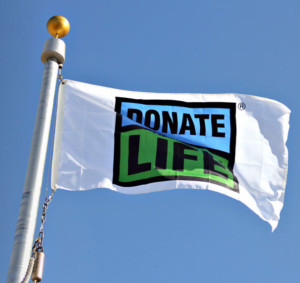 April is “Donate Life Month” and Iowans are urged to sign up to become organ donors.

“Over 120,000 people are waiting for organs nationwide, over 600 here in Iowa,” Kuil says. “April is just to bring awareness to that and to get more people to register to be organ, tissue and eye donors.”

Flag-raising ceremonies are planned at hospitals statewide during the month with the words “Donate Life” on the flag. Kuil says there has been keen interest in organ and tissue donations over the years. “If you are able to be an organ donor, you could save the lives of eight people through organ donation,” Kuil says. “If you’re able to be a tissue donor, you could impact the lives of over 300 through tissue donations. It’s a wonderful gift that you can give.”

About 65 percent of Iowa adults are registered donors. Still, the number of people in need of transplants continues to outpace the number of donor organs. On average, 22 people die each day in the United States because the organs they need aren’t donated in time.