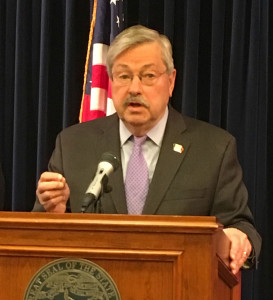 “I’ve indicated a willingness to work with the legislature on this as well as other issues,” Branstad says. “I reserve judgment until we see it in its final form, but certainly this is an issue there is some strong interest in.”

Iowa decriminalized possession of cannabis oil for treatment of chronic epilepsy in 2014, but cannabis oil isn’t sold in the state. Advocates have been pressing state officials to set up a system for growing and dispensing cannabis oil in Iowa. Plus, they want Iowa doctors to be able to prescribe it as treatment for a wide range of chronic conditions.

“We have been open to and met with people about resolving this issue throughout the session,” Branstad says.

Branstad isn’t specifying what he might accept, but he says it’s important to keep marijuana out of the hands of people who would use the drug “for illicit purposes.”

“What we have is cannabis oil which is basically designed to treat a particular medical condition and the question is whether that should be expanded to some others and whether you could have it produced in the state of Iowa,” Branstad says.

Branstad made his comments near the end of his weekly news conference. Find the audio here.

Twenty-three states have legalized marijuana for medical use. Illinois residents suffering from any of 40 different conditions can get a state permit to buy marijuana from state licensed dispensaries. Minnesota residents can buy the drug in liquid or pill form as treatment for a handful of specific illnesses, as well as terminal conditions.