You are here: Home / Business / Iowa Lottery hopes to upgrade vending machines by end of September 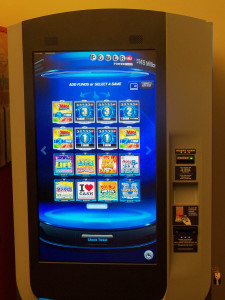 A prototype of the new Iowa Lottery vending machine.

The Iowa Lottery is going to work after the governor signed a bill Friday to allow them to upgrade their vending machines to modern technology.

Lottery spokesperson Mary Neubauer, says they want to have something in place once the maintenance contract on the current machines expires. “That contract expires September 30th, so we have a lot of work to do between now and then. But the plan is to get at least some new equipment into the field by September 30th — and hopefully it would all be out there in time,” Neubauer says.

The new machines will have touch screen technology to allow you to select the product you want. Neubauer says they have two different methods for getting the new machines manufactured.

“On the pull-tab side, we are going to be issuing a request for proposals, and that will be done this week. On the instant scratch ticket side, those machines will be provided under a contract that the lottery already has in place,” Neubauer explains. “Those machines will be provided by the same company that provides our lottery terminals and the communications system that connects those all around the state.”

You can now only buy tickets for lotto games at stores with a lottery terminal, but the new technology adds that ability to the machines. She says if a store now has a machine that sells scratch tickets, the new machine will also allow them to sell lotto games like Powerball and MegaMillions.

“Right now, lottery tickets in Iowa are sold in about 2,400 locations. We have pull-tab vending machines in about 800 locations, and scratch ticket vending machines in about 260 locations,” Neubauer says. “We anticipate that are machine numbers will be about the same or perhaps a little less with this new equipment. Obviously because this new equipment does have a cost, we have to make sure that the machines can pay for themselves in any of the locations where they are installed.”

The controversy over the TouchPlay machines a decade ago required a change in the law to allow the use of the new technology for the Iowa Lottery vending machines.