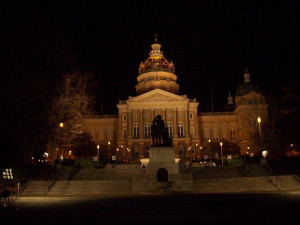 The state capitol at night.

An Oskaloosa company that re-lit the White House eight years ago is turning its attention to the Iowa capitol.

Musco Lighting in Oskaloosa is donating new LED light bulbs to replace all the “high-pressure sodium” lights positioned around the state capitol. The system has been lighting the building at night for nearly three decades.

“Every time I drive by this building, you look at it and you say, ‘Boy, it could look so much nicer,'” says Jim Berns, a special projects engineering manager for Musco. “We’re kind of excited to show what we can do.”

High-pressure sodium light bulbs have been used in street lights for years. Berns says those bulbs made the state capitol look dull.

“It looks very orange and very drab,” Berns says. “It just kind of looks like an industrial setting and not a lot of character to it.”

Musco has installed the same type of new LED lights for some high-profile projects.

“We did the White House in 2008. We’ve also done the Statue of Liberty and Mount Rushmore and the Flight 93 Memorial with LED light source,” Berns says. “…We’re bringing it home to Iowa, our home state.” 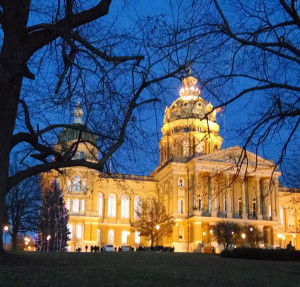 The State of Iowa will pay the Musco crew for its time, but the Oskaloosa company is donating the new bulbs and entire lighting system for the capitol. The new lights will be more energy efficient and engineers are able to more accurately pinpoint where the light beams should be directed.

Tonight, the Musco team will start work at the capitol after sundown to test how each light bulb is aimed. On Tuesday night, Berns estimates the new lighting system will be in place within an hour after sunset. Musco Lighting has been installed in sports stadiums around the world.