You are here: Home / Crime / Courts / Wanted woman in Guthrie County found hiding in an oven 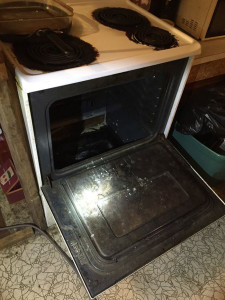 This oven was modified to be a hiding place for a Guthrie County woman.

A southwest Iowa woman is jailed after law officers found her hiding in an unusual place in her mobile home — the oven.

Guthrie County Sheriff’s Deputy Kent Gries says they had a search warrant for the trailer where 25-year old Gabrielle Looper lives in Guthrie Center. Deputies had to use a pry bar to open the front door and then they encountered a few more obstacles. When they entered the home, two vicious dogs attacked the officers and one of them bit a deputy.

The deputies used a fire extinguisher to force the dogs back instead of shooting them. Once inside, deputies conducted a slow, methodical search. Gries said they knew Looper was in the home based on her medical history.

“We knew she was in there, she had just given birth three weeks ago. Our first priority was finding the baby…and then deputies spread out throughout the house and we located her very strangely in the oven,” Looper says. The door to the oven was closed.

Gries said authorities had received a tip beforehand indicating that’s where they were likely to find her. There were actually two ovens in the trailer house, which was a dead giveaway something was amiss, according to Gries. One of the ovens was nonfunctional and was specially modified so a person could hide inside as the bottom was cut out.

Looper was arrested Thursday on an outstanding arrest warrant for probation violation, while 32-year-old Joseph Crawford was also arrested at the scene for interference with official acts.

Both were transported to the Guthrie County Jail. The child was voluntarily turned by over by Looper to her grandmother.