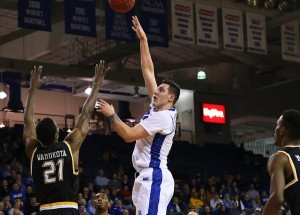 Drake center Dominik Olejniczak is leaving the Bulldog basketball program. Olejniczak’s play down the stetch was a bright spot in an otherwise dreadful season for the Bulldogs that saw them finish 7-24 overall and just 2-16 in Missouri Valley Conference play.

The seven-footer from Poland averaged six and a half points on the season but scored 19 in a win over over Loyola in the regular season finale and had 18 points and eight rebounds in a 69-67 loss to Missouri State in the opening round of the Missouri Valley Conference Tournament.

He is the second player to leave the team since the end of the season. West Des Moines native Kale Abrahamson announced in March he was leaving the program.