You are here: Home / News / Trout stocking is underway in northeast Iowa 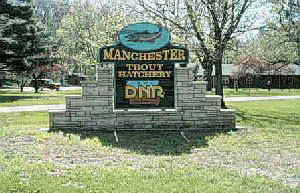 “We stock approximately 310,000 catchable size rainbow and brook trout in the streams throughout the year,” Rosauer explains. “And each stocking run… typically we might have one to three to streams worth of fish in that pickup. And we’ll stock anywhere between 100 and 400 fish in a stream at a time.” The stocking of the trout is the end of the state’s growing process.

“All the fish are hatched at the Manchester fish hatchery — and then once they are approximately three to four inches in size — they are either kept at Manchester for grow out, or distributed to Big Spring and Decorah hatcheries for final grow out.” The DNR trucks will carry a couple of different types of trout to the streams.

“Our catchable size trout that we stock are primarily rainbow trout, but we also stock brook trout as well. It’s about a 75-25 mixture as you look at it as a whole,” Rosauer says. “And we also stock fingerling brown trout in some of out put and grow streams. Those are approximately two inches in size — so anglers out there catching brown trout — if they were stocked fish, those fish are probably three to four years old before they might reach the size where they might be kept in the creel.”

There are around 40 streams which he says have at least some natural reproduction. “There’s several streams in there are sustaining enough that they don’t need any supplemental stocking. The fish that are reproducing for the most part are brown trout. There’s a handful of streams that have brook trout reproducing at a sustainable level in them,” Rosauer says.

The DNR is using a new schedule this year where they announce some of the trout stockings, and some they don’t. A list of stocked streams is available on the DNR trout map or trout stream webpage at iowadnr.gov/Fishing/Trout-Fishing.