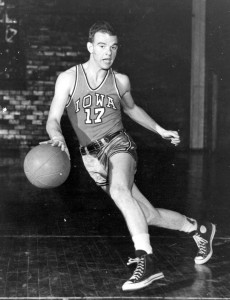 Former Iowa basketball star Murray Wier died at the age of 89 at his home in Georgetown, Texas.

Wier was a four-year starter for the Hawkeyes from 1945-48. He led Iowa to a Big Ten title in 1945 and as a senior in 1948 became the school’s first ever consensus first-team All-American by averaging 21 points per game.

“Our deepest condolences go out to the Wier family,” said UI head coach Fran McCaffery. Murray was one of the all-time greats, blazing the trail for Iowa basketball. Murray won a Big Ten championship, and led the NCAA in scoring, and becoming the program’s first first-team All-American. He will be missed by everyone in the Iowa basketball family.”