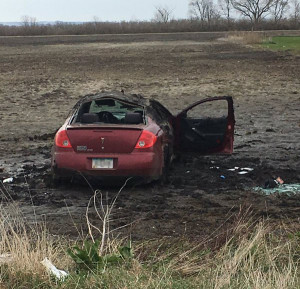 An Onawa man is facing charges for taking off when a Woodbury County Deputy tried to stop near Sloan Tuesday morning.

The vehicle took off on a country road, reaching speeds up to 117 miles-an-hour. When the pursuit reached Salix, the driver, 36-year-old Justin Derby, lost control as he tried to avoid and oncoming semi. The vehicle rolled into a field.

Derby fled the car and was chased to a sewage lagoon where he at first refused to come out, but then surrendered. Derby is charged with driving with a barred license, speeding, leaving the scene of a property damage accident and reckless driving.

Derby and two passengers were taken by ambulance to the hospital for treatment of non life-threatening injuries. Two other passengers in the car refused treatment. The Sheriff’s Department says more charges are possible.