You are here: Home / Health / Medicine / Report: living in Iowa getting more expensive 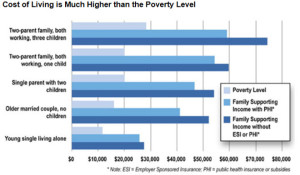 A new report shows it’s getting more expensive to live in Iowa and many families are struggling to earn enough money to cover their basic needs.

The Iowa Policy Project’s 2016 Cost of Living in Iowa report outlines how much working families need to earn in order to pay for such things as food, housing, utilities, child care, and transportation.

“Insurance, on the individual market at least, has gone up 17-to-23 percent,” Fisher said. “These are actually premiums people are paying right now, in 2016, for health insurance.”

Iowa’s current minimum wage is $7.25 an hour. The report states the average Iowa family of four would require each parent to earn at least $16.89 an hour to make ends meet.

“The median wage (in Iowa) is a little less than $16 (an hour). That means half of the jobs in this state pay less than that, yet…these families will need to earn $16 to $25 an hour — full-time, year-round — in order to get by,” Fisher said.

The report identifies some of the lowest overall costs of living are found in the eastern Iowa metros of Waterloo-Cedar Falls, Davenport, Dubuque, and Cedar Rapids. The highest cost region of the state is in the southeast corner, including the cities of Fort Madison, Burlington, and Mount Pleasant.