You are here: Home / News / Some green trees are turning brown with winter burn 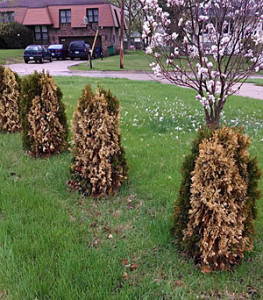 Winter burn is showing up in some Iowa trees.

Some Iowa trees are feeling the burn — and it has nothing to do with the presidential campaign.

Tivon Feeley of the DNR says a series of warm and cold weather has caused issues for conifers, or evergreen trees. He says February had a lot of days where the air temperature got above freezing, and trees needed water.

“The soil was still frozen and so that root system stayed frozen and couldn’t take up the water, but those needles used up all the water reserve they had and they started to dry out,” Feeley explains. “In the last few days when we were warm — especially a couple days ago when we up to 70 and 80 degrees — the conifers have started to brown up. And we call that winter burn,” Feeley says.

The brown can spread through the tree, and there’s nothing you can do about it. “Unfortunately it’s a long-term thing, it’s permanent, many trees will die from it. The most common species that we are seeing the winter burn or winter desiccation on are arborvitae a little bit in white pine, and a little bit in white fir,” Feeley says.

If needles on trees are dead but buds are alive, new plant foliage will regrow to replace the winter burned foliage, but he says if both the buds and needles are dead, the tree will not recover and will need to be removed. He says you can prune out any of the dead branches, but he says if the tree is brown all over, you can try to start watering it. “Chances are once it starts to brown up, the tree is actually going to die once we get into the hotter days of July and August,” Feeley says.

He says Iowa’s temperature variations are not good for the conifers overall, and there are just a few species that can handle it. “When we’ve got these winters that are kind of sporadic, they don’t stay consistently frozen throughout. Historically we’ve seen that throughout Iowa and that’s why we don’t have the conifer populations here that a lot of states to our north would have. So, a conifer might not be the best species for Iowa, for that reason,” according to Feeley.

But he admits the trees which stay green all year, don’t drop leaves, and make for beautiful landscaping are hard for Iowans to pass up. “There are so many benefits to having the conifers…if it’s something you want to get into the conifer world, it’s probably worth getting a hold of ISU Extension and seeing what other options are out there that might be more adapted to our climate here in Iowa that can get through out winters.. Because arborvitae are not doing so well,” Feeley says. He says some of the winter burn damage is already showing up, and he expects the damage will become more apparent with the warm weather in June and July.