Bills like this have been showing up in Waterloo.

Some fake $100 bills are making the rounds in Waterloo. They’re not the typical counterfeit bills, however.

Waterloo Police Captain Dave Mohlis says the fake $100 bills are made for “movie use only,” so they’re legitimate to sell and possess as props.

“What makes this stuff illegal is when somebody takes the (fake) money and attempts to use it to purchase items, then it becomes illegal,” Mohlis says. “We’ve had several instances recently where people are using it to try to purchase items and have purchased items. So, people really need to be looking at that cash before they take it.” 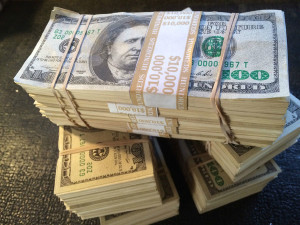 Stacks of the fake $100 bills can be purchased online from sites such as eBay. Although they look and feel somewhat similar to a real $100 bill, Mohlis says they’re clearly marked as being for motion picture use only.

“They look like a normal $100 bill, but the difference is where it says ‘United States of America,’ that’s been replaced with something that says this a movie prop,” Mohlis says.

There have been around a dozen cases in which the fake bills have been used in transactions over the past few months in Waterloo. Mohlis says they have made one arrest in the case. “But, we’ve had another half dozen to 10 new cases that are related to this money being spread around the city to purchase items illegally,” Mohlis said.