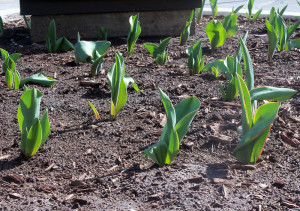 Newly emerged flowers like these face a freeze danger.

Iowa homeowners who have tulips, daffodils, newly-planted trees and other tender plants poking up in their yards will need to get busy this afternoon to save them.

Meteorologist Craig Cogil, at the National Weather Service, says a Freeze Warning is posted for a wide portion of Iowa, roughly from Highway 20 south.

“We’re going to see temperatures drop well below freezing overnight across the entire state,” Cogil says. “We are concerned about some of the trees and vegetation across the southern half to two-thirds of the state that have seen growth and are susceptible to freezing temperatures.”

Many areas of the state may see temperatures dip into the low-to-mid-20s tonight and into tomorrow morning. Homeowners will need to act to keep their plants from being nipped or possibly killed by the overnight cold snap.

“Individuals in those situtations, obviously, if you have smaller plants, cover them up, that helps out,” Cogil says. “People that have orchards will have mitigation techniques they use. The main thing is to get them covered up.”

We’re a couple of weeks into spring now but Cogil says this isn’t an unusual situation. “Some years, especially if you look back at 2012, had an extremely warm March, everything was ahead as far as growing was concerned,” Cogil says. “We saw that a little bit in March where temperatures were warm and things are maybe a little bit ahead of normal, but this is not entirely unusual.”

Some areas of northern Iowa are seeing flurries fly this morning and while it’ll be a cold weekend, Cogil predicts the sparse snow won’t accumulate.