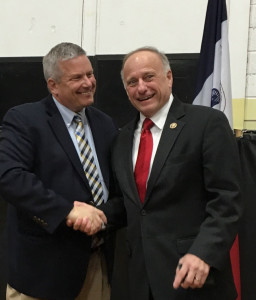 “This district needs to support a strong conservative, a hardworking candidate and we have that candidate,” Northey said today during a speech in Fort Dodge. “That’s our Congressman Steve King.”

Republican businessman and state senator Rick Bertrand of Sioux City is challenging King in June’s Republican Primary. Northey’s endorsement may provide some cover for King, who has been under fire from some in the GOP for backing presidential candidate Ted Cruz, an opponent of the federal ethanol production mandate.

“I don’t know how that will all play out,” Northey told reporters today. “We’ve had some conversations with some folks that care a lot about that issue…When I think of who I want in the room talking with conservative congressmen and senators, talking with a potential president on ethanol issues, I want Steve King there.”

Northey is currently in the middle of his third term as state ag secretary. Northey described King as a “great friend of agriculture.” King described Northey as a third-generation farmer who is “deeply steeped” in agriculture.

“His statewide presence and his activity among all of the ag issues, I think that that’s a reminder of where I have long been and none of that has changed,” King told reporters.

Northey announced his endorsement at the Iowa GOP’s fourth district convention in Fort Dodge, about 100 miles southeast of the Northey family farm near Spirit Lake. Northey has a history of weighing in on Republican Primary contests. Northey endorsed Mark Jacobs in the 2012 Republican Primary for U.S. Senate. Joni Ernst won that primary and the general election.

Bertrand does not plan to speak at today’s convention.