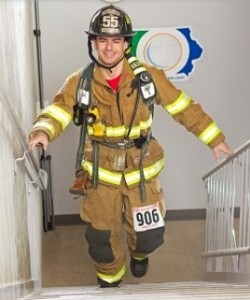 Around 1,300 people will be climbing stairs in several buildings in downtown Des Moines this weekend for a good cause. The annual Fight for Air Climb is a fundraiser for the American Lung Association.

Micki Sandquist is the executive director of the American Lung Association in Iowa. “Our participants pay a registration fee and then they have a $100 minimum fundraising requirement…so we expect to bring in over $300,000,” Sandquist said. The event will take place on Sunday between 8 a.m. and noon.

Many of the Fight for Air Climb participants form teams to combine their fundraising efforts. A group of 80 stair climbers, calling themselves “Team 27,” has consistently been the top fundraising team among the 52 Fight For Air events across the country.

“It started seven years ago with two sons, Jason and Jeff Muselman, who wanted to honor their dad, Tom, who had a double lung transplant on June 27 (2009),” Sandquist said. “So, they’re celebrating the activity with him every year and on Sunday, it’ll actually be Tom’s 66th birthday.” Tom Muselman is among seven double lung transplant recipients on Team 27.

Some participants in the event are firefighters, who climb the stairs wearing their heavy jackets, pants, helmets, and other gear. “This year, the Pella Fire Department has 12 firefighters who are participating in relay fashion in honor of the fire chief’s wife who had a double lung transplant,” Sandquist said. “She has pulmonary fibrosis. It’s a difficult disease and it’s not curable, but she now has a new lease on life after her transplant.”

The four buildings playing host to the event feature a combined 90 floors or flights of stairs. “The majority of our climbers will climb all four buildings,” Sandquist said.

The stair climbers are all timed and awards are handed out to those who complete the course in the fastest times. Most of the money raised from the Fight for Air Climb events will be directed toward lung disease research.