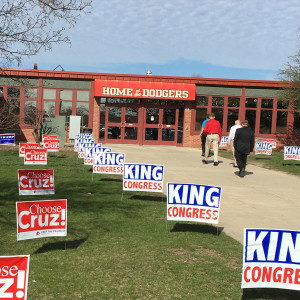 All but one of the 12 delegates Iowa Republicans elected this weekend to attend their party’s national convention this summer are supporters of Ted Cruz.

Tamara Scott, one of Iowa’s representatives on the Republican National Committee, urged her party to unify behind whomever is chosen as the party’s 2016 presidential nominee.

“Don’t get caught up in the angry politics and rhetoric you see on TV,” Scott said during a speech Saturday in Fort Dodge. “…We don’t have any enemies running on our ticket. They are opponents. The enemy’s on the other side and they will destroy us if we don’t stand together.” 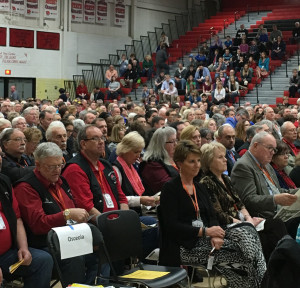 Scott said if any GOP candidate is “weak,” it’s up to the party’s grassroots activists to “make them stronger.”

About 2500 Republicans turned out at the four district conventions Saturday. David Jensen of Ringsted was among the roughly 600 Republican delegates who attended the 4th district event in Fort Dodge. Jensen said he’s never seen this level of “excitement” within the GOP.

“There’s also a lot of concern, too,” Jensen said. “People are concerned about Donald Trump, how he’s going to handle the foreign policy, and there’s a big concern about who he’s going to appoint to the Supreme Court, too.” 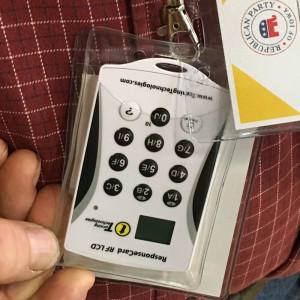 Voting device issued to each delegate

Jensen backed Ben Carson in the Iowa Caucuses, but he now wants to see Ted Cruz win the GOP nomination. If Jensen is faces the choice of Hillary Clinton or Donald Trump in November, though, Jensen would vote for Trump.

“He’s shaken up the Republican Party. He’s fighting against the establishment Republicans, which I think is a good idea,” Jensen said.

Trump’s organization was no match Saturday for the Cruz forces who dominated the delegate selection process. Matt Schultz, Cruz’s state chairman, was elected as a national convention delegate, along with four state legislators who were part of Cruz’s Iowa Caucus leadership team.

Fifteen more Iowa GOP delegates to the Republican National Convention in Cleveland will be elected at the party’s state convention in Des Moines next month.  The votes of all 30 Iowa GOP delegates at their national convention are set for the first round of voting, apportioned among several candidates based on the outcome of the Iowa Caucuses.  But if there is a second round of voting, all 30 Iowa delegates will be “unbound” and able to vote for the candidate of their choice.