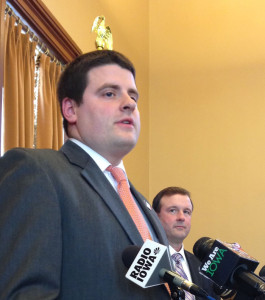 “This isn’t just a problem in urban or rural Iowa. This is something that we’re all in together as a state and that’s why we’ve picked two funding streams and devoted those to urban and rural,” Grassley said.

“Now that we’re looking at multi-tens-of-millions-of-dollars investment, we need to step up our game on this particular topic,” Isenhart said. “We need to start considering what is our return on investment.”

Most Democrats in the House voted against the Republicans’ bill. Representative Kirsten Running-Marquardt, a Democrat from Cedar Rapids, was a reluctant yes. She said the bill’s $9 million allotment for next year is a mere “baby step” to fix a $5 billion problem.

Representative Mary Mascher, a Democrat from Iowa City, voted no. She suggested the bill failed to hold farmers accountable.

“This bill gives every one of you the ability to vote for dollars to be put toward water quality in our state,” Cownie said. “I believe elected officials should be the ones making that decision and not a lawsuit and not a judge.”

Representative Bruce Bearinger, a Democrat from Oelwein, voted for the bill because he fears something else: federal intervention.

“If we don’t do something, someone else will,” Bearinger said. “And, unfortunately, I don’t think we want the federal government coming in and doing things in this state.”

The bill now goes to the Iowa Senate where it faces an uncertain future in its current form. Senate Majority Leader Mike Gronstal has said Democrats will unveil their own approach to addressing the state’s water quality problem this week.