You are here: Home / Sports / Reivers use spring to rebuild 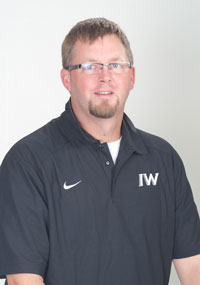 There is plenty of opportunity and plenty of competition as the Iowa Western football team conducts spring drills. The Reivers lost nearly every starter off last year’s team that finished 10-2 and was third ranked in the final junior college poll.

Iowa Western coach Scott Strohmeier says the spring is crucial for the freshmen who did not get much playing time last season.

“This is their chance to show the coaches they deserve to be on the team”, said Strohmeier. “We have 100 freshmen that are going to be coming in this August so you get 20 practices to show you are worthy to be the next guy. If you take any days off next fall there is a bunch of guys coming in that will get a shot to take your spot.”

Strohmeier says about 80 players are going through spring drills and some position groups are deeper than others.

“Our numbers are good. We get a lot of plays and a lot of reps and we are really two deep across the board so we will get two solid teams in there.”

The Reivers close out drills with a spring game on May sixth.