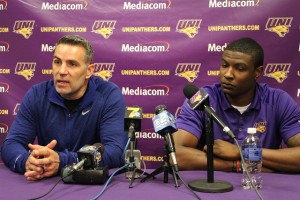 Former UNI quarterback and NFL MVP Kurt Warner returned to Cedar Falls for a taping of the NFL Network show “Back 2 Campus”.

Warner is an analyst for the network and the show will feature him and Panther cornerback Deiondre’ Hall.

“It is a new series they are doing is taking a number the talent and have them go back to their campus and connect with one of the guys that is currently chasing his dream of the NFL”, said Warner.

Hall is hoping to be taken in this month’s NFL Draft and Warner says as more FCS players succeed in the NFL it will help players like Hall get a chance to prove themselves.

“What else can you ask for than to put it in your hands and go out and do it and that to me is the most exciting about this process. All I wanted for a long time was just give me a chance, put a football in my hand and let me compete against everyone else. The great thing is (he) will get that opportunity and now it is just be ready.”

Hall was the Missouri Valley Conference Defensive Player of the Year after recording 82 tackles and a league-high six interceptions. Hall says he was surprised when approached about appearing on the show.

“At a first I really didn’t believe it and then I started getting excited.”

Hall’s versatility is viewed as a strength after playing corner and safety in college.