You are here: Home / Human Interest / Weather’s not cooperating this morel mushroom season 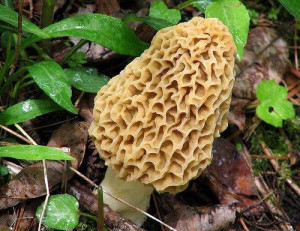 You can put them on your pizza, toss them in your salads or fry them in butter and serve as a side dish.

For many people, morel mushrooms are some of the tastiest wild foods in Iowa. The season for hunting morels is underway, but Annette Whitrock with the Wapello County Conservation Board says the weather hasn’t cooperated so far this year.

“Depending on where you are, it would be late March until I guess the season’s over through April, sometimes into May, just depending on weather,” she says. “You really need temperatures for the soil probably in the 60 degree area and you can’t be down lower than 40 degrees at night for them to grow. We haven’t had that yet.”

Soil temperature maps provided by Iowa State University show soil temperatures around 45 degrees for most of Iowa. Overnight temperatures dipping into the 20’s and 30’s are also preventing morels from popping up.

Even when they do pop up, morels are some of the most elusive foods to find. Hunting them requires hiking trips through the woods and it takes a sharp eye to spot them. Whitrock says there are some urban legends on the best places to look.

“I’ve been told dead elm trees are the place to look, ash trees, oak trees, old apple orchards or where the May apples are blooming, so it really depends on who you talk to,” Whitrock says. “I think if you find a spot, you find a spot.”

Whitrock suggests being wary of all the advice, as people may be trying to drive you away from their best spots. Whitrock says in the early hunting season, morels grow mostly on south facing slopes because that ground is warmer. But be careful, because Whitrock says the inexperienced morel hunter can be fooled or even poisoned.

“There’s some false morels out there and some morel look-alikes that can, depending on how you react to it, I guess they could give you symptoms like cramps,” Whitrock says. “some of them, if you react to them poorly, could kill you.”

According to Whitrock, it’s fairly easy to tell if what you’re looking at is a true morel or an impostor.

“Morels have a darker cap that is pitted, for lack of a better word, and is connected to the stem and I guess the best thing to look for is a hollow stem,” Whitrock says. “If your mushroom doesn’t have a hollow stem, chances are it’s not a true morel — probably don’t want to eat it.”

Whitrock cautions Iowans to make sure they have permission to hunt for morels on property they don’t own. You can find out if you can hunt on public properties by contacting your local conservation board or the Iowa Department of Natural Resources.