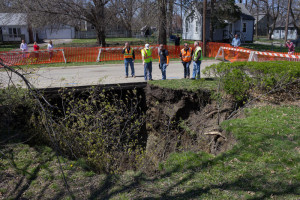 A homeowner in Des Moines stepped outside this morning to find a massive sinkhole in the front yard. It’s estimated to be more than 30 feet deep and roughly 20 feet in diameter.

State Geologist Bob Libra says the sinkhole likely formed due to an abandoned coal mine in the area. Libra notes that large and sudden collapses are unusual in Iowa.

“It’s not like you walk outside your house too often and your yard’s gone. That’s pretty rare,” Libra said. In addition to underground mining cavities, sinkholes are also seen in eastern Iowa when ground water dissolves limestone.

“You’ve probably seen some pictures in the past from Florida where they have very large sinkholes open and swallow houses. We don’t have anything that’s usually that aggressive,” Libra said. Florida sinkholes are formed from dissolved limestone as well, but the humid climate of the Sunshine State makes them far more common.