You are here: Home / News / The capitol case of the missing forks 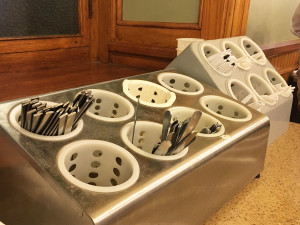 It may not be blatant thievery, but cutlery is missing at the statehouse.

There’s a cafeteria on the ground floor of the capitol that’s open when lawmakers are meeting in the building. It had a few thousand knives, forks and spoons in January when the legislature convened. Nearly all the metal forks, though, have vanished — one at a time, apparently.

Ben Ferguson, manager of the “Capitol Café”, suspects it’s because people in the building pick up a metal fork as they take their food “to go.”

“The capitol’s a huge location, so they go off to their office, have breakfast, have lunch, whatever — and they don’t bring ’em back,” Ferguson says.

Senator Michael Breitbach of Strawberry Point has become the point-man in tracking down these missing forks.

“I know there could be some senators, well, maybe inadvertently have a few sets in their desk drawers,” Breitbach said this morning during remarks on the senate floor. “It might be nice if you’d hand them to a page, let ’em go downstairs, so if I go down to eat lunch today maybe I could have a steel fork instead of a plastic one.”

Cutlery loss is a common problem in the cafeteria industry according to Ferguson, so he appreciates the help.

“There’s only so much we can do about being the fork police,” Ferguson says.

The case will be closed when the legislature ends soon, because the cafeteria will shut down.

“But then next year, we’ll be back and we’re going to purchase more forks for next year,” Ferguson says, “thousands and thousands of forks.”