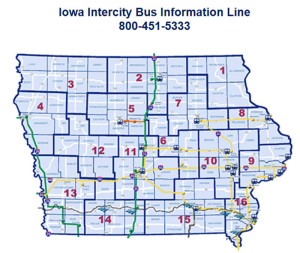 The buses and minivans will replace older transit vehicles in 20 cities across the state. Randy Barton is the Transit Programs Manager with the DOT.

“Iowa, unfortunately, has an aged fleet,” Barton says. “The FTA designates a useful life based on mileage and age of vehicles and Iowa, last I saw, was second in the nation for oldest fleet vehicles.” Iowa trails only South Dakota on that list.

The Federal Transit Administration defines the “useful life” for a light-duty bus, for example, as four years or 120,000 miles.

“We’ve got around 1,600 (transit) vehicles in Iowa and over 1,000 of them are beyond the FTA described useful life,” Barton says. The $5.7 million for new transit vehicles approved Tuesday comes from federal funding. Barton says Iowa needs much more to bring it’s transit fleet up to par.

“Just to replace Iowa’s vehicles that are beyond the FTA’s definition of useful life would take $159 million,” Barton says. He’s quick to point out, however, that the older transit vehicles being used around the state are still well-maintained and safe.

“They can rehabilitate — put in new engines, transmissions, drivetrains, whatever — but, usually what happens is the body itself gets too old and you can’t repair a frame,” Barton says. “You have to remember we’re in Iowa, so there’s a lot of salt on the roads and (that leads to) a lot of corrosion.” Iowa has public transit vehicles in operation in all 99 counties.