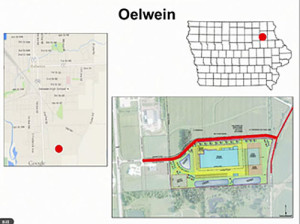 Oelwein in northeast Iowa received a modified RISE grant of a little more than two million dollars. The DOT’s Craig Markley told the commission the grant will help build access for an expansion of East Penn Manufacturing.

“They manufacture lead acid batteries. And they currently have a presence in Oelwein of roughly 80 staff. They are looking at this facility to add 350 staff,” Markley says.

The commission originally approved $1.7 million in funding, but Markley says the company found out that would not be enough. He says as they got into design process and realized the costs are considerably higher than what they thought and they would need an additional $500,000 in funding.

Markley says the company is creating enough jobs to cover the requirements for the additional funding. He says the jobs are 118 percent of the labor shed wage rate at $17.20 an hour. The company is putting nearly $67 million into the project, which is expected to be completed in December of 2017.

The city of Ellsworth won a grant of a little more than one million dollars to help construct a roadway to an open up 15 acres in an industrial park. Garner was approved for $239,000 to help build a roadway on the north side of town that will provide access to industrial lots.