You are here: Home / Crime / Courts / Convicting ‘Peeping Toms’ may be easier in Iowa after July 1 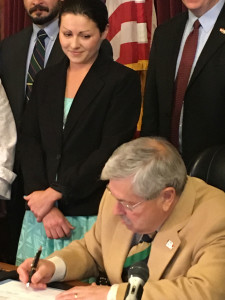 Governor Terry Branstad has approved changes in Iowa law that will make it easier for prosecutors to convict so-called “Peeping Toms.”

Marion County Attorney Ed Bull says he lost a case because current law requires the victim to be nude or partially nude.

“About four years ago, we had a situation where a young lady, I think she was about 13 or 14 years old, was being viewed in her bathroom after she had gotten out of the shower,” Bull says, “but she was wearing a towel at the time.”

What made the case even more frustrating for the prosecutor was that man couldn’t be charged with trespassing because he was on a public sidewalk outside the apartment building where the girl lived. That’s why Bull began lobbying legislators to make changes in the state’s trespassing law.

“Being in your own home, the place where you ultimately should feel the safest, is where she no longer felt secure,” Bull says. “It seemed ridiculous to me that whether or not she was wearing a towel or not, her sense of privacy, her sense of self would have been destroyed, and I couldn’t hold the offender accountable.”

Ruth Lapointe of Des Moines also lobbyied for the bill. “I’m very happy to see the bill finally get signed into law,” Lapoint says. “It’s going to work to protect a lot of victims in Iowa.”

Lapointe is the victim of a “peeping Tom.” She was a University of Iowa student in 2012 when a neighbor discovered a peep hole in her bathroom. Turns out there was an elaborate system of peep holes and crawl spaces in the building, so the landlord could spy on Lapointe and other tenants. While the man was convicted, Lapointe says it wasn’t easy for prosecutors to try the case or for the victims to sit through the proceedings.

“Many of the other victims have been following this story and are very pleased to see this law get passed,” Lapointe says.

Starting July 1, state law will say Iowans in places like their home, a locker room and the dressing room at the mall have a “reasonable expectation” they won’t be “viewed, photographed or filmed.” Those found guilty of invading someone’s privacy in that way would be guilty of an aggravated misdemeanor. Invasion of privacy under current law is a simple misdemeanor.

Governor Branstad signed the bill into law Wednesday afternoon in his formal statehouse office. Lapointe and Bull both attended the bill signing ceremony.